I am currently reading The Warmth of Other Suns, by Isabel Wilkerson (the first African-American woman to receive the Pulitzer Prize for Journalism), about the Great Migration of African-Americans out of the South during the Jim Crow years. It makes me shake and cry with every chapter. It makes me feel sick and nauseous and angry and enraged and horrified. Sometimes I don’t have the strength to pick it up. I want to run away and hide from the horror of what happened in the last hundred years in this country – in the lifetimes (and in the lives) of my grandparents and my parents and beloved family friends.

At the same time, I cannot turn my face away. The Warmth of Other Suns is enlightening and it is empowering for me to read it. It is brilliantly written. It is well-researched and engaging. The narrative structure of the work follows the story of three specific individuals and their stories are interwoven with incredible detail of the culture and the history of the time, painting a vivid, poignant, and personal picture of life for black folks in the decades following the “end” of slavery. It explains so much. It explains things that I didn’t know I so desperately needed to understand. As I realized that people I was close to in my lifetime would have been alive during the hellish decades post-slavery (and would have dealt with some of the horrors described in the book, firsthand), I could feel the impact of the events of the first half of the 1900s on my own, personal life. It made my own grandparents and parents and, therefore, my own life experience, make more sense to me.

The book fills enormous gaps in the so-called “history” that I was taught in school. I think that most of us think of slavery as something that happened a long time ago, to other people, elsewhere, and that things got better after that and that now they’re way, way better and we’re really far from where we’ve come. What is astonishing is that slavery and neo-slavery has been happening and happening and its ramifications have been happening and happening, continuing inexorably forward, and somehow we have been hoodwinked and bamboozled into believing that it is all lost in the distant past. It is yesterday and it is today and it is tomorrow. Even now.

In the past couple of years, I have been trying to educate myself about anti-black racism and how things are in the shape that they’re in right now, racially. I’ve been trying to build a bridge in my mind between the Middle Passage and whoever was the last black person to be on video this week being killed by a police officer, extrajudicially. It has been clear that I didn’t have enough of a grasp of the history to connect the dots from here to there.

The more I educate myself, the more I come to grasp the enormity of my miseducation. It is profoundly astonishing to me the degree to which the history of this country has been concealed and the degree to which propaganda about both the past and the present has been fed to us all. Before I began this arduous, painful process of self-education, I could tell you more about the history of British, French, and Spanish monarchs from the Renaissance through Queen Elizabeth, the history of the Spanish Inquisition, and the history of the Crusades, than I could tell you anything about the brutal realities of Jim Crow, neo-slavery, redlining, or the mass incarceration of black people in the United States within the last hundred years. The excellent formal education I have received did not include almost any meaningful detail about the real cultural, structural, institutional, and economic ramifications of slavery and of the hundred years or so since then on this country and on all of us who live here. I am still shocked at the ways in which my education has been corrupted and I feel foolish that I am still so shocked.

Having been raised to believe that I live in a democracy where freedom of speech is the law of the land and the free-flow of information is held to be some kind of birthright, I am still astonished at the degree to which I have been brainwashed. We have been lied to, over and and over and over again and we mostly have no idea it has happened.

We live in a country in profound denial about the nature of itself.

As an individual, it takes consistent and persistent effort to break through that denial. But, it is worth it in order to be sane in the midst of this insanity. Collectively, it will take an enormous amount of consistent and persistent effort, on the part of an entire nation, to burn through that sweet, sticky fog of insanity that has left us as a culture in a stupor of denial and delusion, unable to meaningfully repair the impact of hundreds upon hundreds of years of slavery and systemic, institutional racism because the culture cannot even acknowledge that it has happened and is still happening.

I am only just beginning to scratch the surface and my research has primarily been concerned with the people I am descended from. There are so many more books and articles to read. There is so much education to do. For me, it has been exquisitely painful, but phenomenally liberating. Waking up to reality is so empowering. I invite you to join me on this journey of self-education, of burning through the ignorance and delusion, of waking up.

A partial list of what I’ve read on the topic of anti-black racism in this country (that I would highly recommend) includes:

James Baldwin: The Fire Next Time

Ta-Nehisi Coates: Between the World and Me

Baratunde Thurston: How to Be Black

Isabel Wilkerson: The Warmth of Other Suns (I’m about halfway through)

There have been so many, many others, but these are the ones I can remember easily off the top of my head, because they were so useful for me.

The next book in my queue is Douglas Blackmon’s: Slavery By Another Name, but I’ll need a good work of science fiction – maybe something by N.K. Jemisin – or two between now and then, because I need a break between ordeals.

“It is truly horrible to understand yourself as the essential below of your country.

It breaks too much of what we would like to think about ourselves, our lives, the world we move through and the people who surround us.

The struggle to understand is our only advantage over this madness.”

–Ta-Nehisi Coates, from Between the World and Me

The following image showed up in my Facebook feed and it seemed like a good (albeit flimsy) excuse to talk with you all about all of this. Consider the green part of the image a typo. Consider, perhaps the red part extending through the entire part that is currently yellow. Then consider the green part orange, perhaps on its way to eventually someday, maybe being yellow. Green is off in the distant future, someday, maybe, hopefully, if we all work really, really hard on a collective level to wake up. 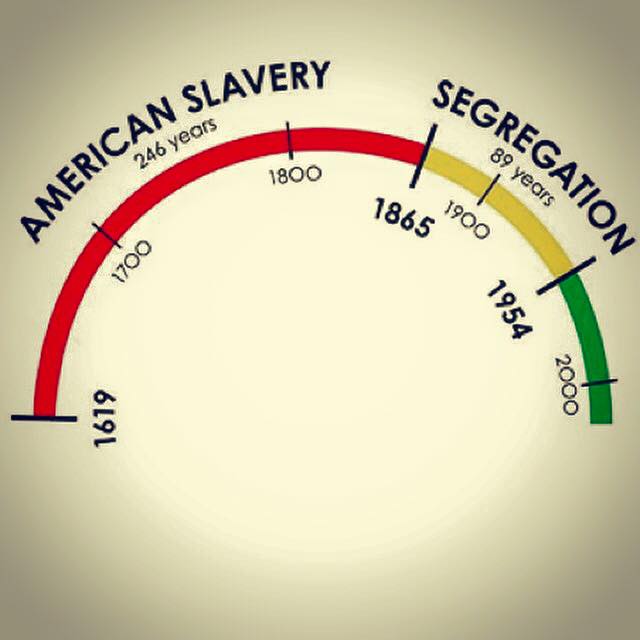